(Man, that sounds like an awesome short story or something. Anyway.)

I seem to have a curse laid upon me when it comes to obtaining books. I seem to have brought it upon myself, way back in high school, unknowingly. It began with an author I have come to love dearly, and am glad of having become aware of, but…well, let me tell you the tale.

Way back when I was just a little hunter, I wandered into a Waldenbooks (oh yeah, we’re talking old-school) with the intention of picking up a new book. I always seemed to find things through other people, and never on my own–so this was my solution. I was bound and determined to find something that was mine and mine alone. I had no ideas, no clues. I was going to pick up a book that looked interesting, and go from there.

What I found was a gorgeous cover, and an intriguing premise. 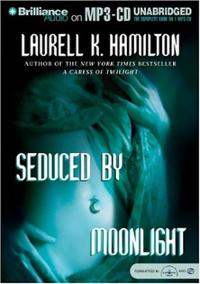 Kingdoms of faerie! Magic and secrets! Betrayal! This sounded fascinating! This was everything I wanted, and it was perfect. I bought the book and absolutely loved it. I kept talking to a then-friend of mine about it, and lent her the book to read. We both loved it, and I was thrilled. Finally, I had something that I could introduce to them.

And a few weeks later, I got a phone call.

…what. Book 3? How could this be book three? How had I missed that? But sure enough, when I looked up the book, it was in fact the 3rd book in Merry Gentry’s series, and I needed to catch up. I will give Laurell K. Hamilton this, however: I never felt lost. I was introduced to the characters and world well enough that even after the whole book, I had no idea it was in the middle of a series. But no matter – I got the books and I read them. I’m still a huge fan of Merry Gentry, and am anxiously awaiting the next book.

For many years, I thought nothing of it. And then just a few years ago, it happened again.

My friend Denise, who I’ve mentioned many a time before here on the blog, did a giveaway for Chuck Wendig’s book THE CORMORANT. Now, this one, I did in fact know was a 3rd book, since she let everyone know before they entered. I laughed it off, remembering the “fun” of SEDUCED. Anyway, I probably wouldn’t win the giveaway anyway.

Fast forward to sometime in the last year or so. Now I’m following Chuck on Twitter, since I’d looked him up when I won CORMORANT. (Yeah. I won a book by an author I didn’t even know. I’m classy like that.) I have fun following him; he’s got a good sense of humor and I’ve actually had a few small conversations with him. S’all good.

He has a book release! He’ll give away copies to the first 3 people who message him! (I think it was originally 3, at least.) I jump on this! There’s no way I’ll win, but hey! I’m actually seeing it as it posts, so maybe I will! What’s the worst that can happen?

…and then I win. (I think 3 or 4 or us ended up all messaging at once, and we all got it, so that was cool.) Cool! I get him my address and I wait until the book shows up.

See that at the bottom? TRILOGY. AND THIS IS BOOK THREE. The curse strikes again. So not only do I own two Chuck Wendig books, but they’re both book 3 in their series. And as far as I can tell, every bookstore locally refuses to sell anything he’s ever written. (Including AFTERMATH, his Star Wars book. This makes LITERALLY no sense to me.) And until I have a more steady income, I’m not able to buy the books on my own. Sigh.

So I’m hyper-paranoid about getting books now, needless to say. I’ve almost fallen in the trap again but I’m making absolutely sure before I get anymore books. My TBR is too long as it is. I don’t need any more series added.

And one of these days, I’m finally going to read my Chuck Wendig books. Some day.

One thought on “Curse of the Third Book”